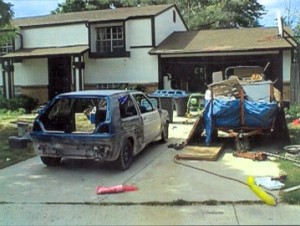 you didn’t have an active homeowner’s association?

If you’ve noticed that Woodgate is not cluttered with unused and junk vehicles, broken garage doors, weeds, debris, holes in siding, falling down fences, trash, etc., it’s not by mere coincidence. Your Homeowners Association is responsible for correcting many of these kinds of covenant and code violations in Woodgate. Many neighborhoods in Aurora have Protective Covenants but no HOA to enforce them, and it shows. Without an Association, it is up to individual homeowners to take action, which rarely happens because neighbors don’t like to make complaints against neighbors. Can you imagine what Woodgate would look like if it didn’t have an active HOA? Perhaps you moved into Woodgate because of its kept appearance. It is imperative that we maintain Woodgate’s appeal and property values and continue with the Homeowner’s Association*. We can’t do it without your support however.

The Woodgate Single Family Homeowners Association enforces city codes and Filings 1-4 Covenants by handing out advisory notes from the HOA. Most homes correct issues when they receive these notes. If corrective action is not taken, the violation is either reported to the city, if it is a city code violation, or the homeowner receives a letter from the Woodgate SF HOA if it is a covenant violation. If it is a city code violation, the city codes office verifies the violation and ensures that it is corrected. They can take actions ranging from violation notices up to court appearances. If it is a violation of Woodgate Covenants, a series of letters is sent from the HOA, and if not corrected, the violation is referred to the HOA lawyer for legal action.

All homes are required to have addresses visible from the street, with the numbers no less than 4 inches in height. Address numbers must be in sharp contrast to the building color or other background.

Bushes over sidewalks must be cut back six inches from the sidewalk to clear the walkway. Plants which have thorns, spines, or prickles shall be set back a minimum of four feet from a public sidewalk. Tree branches must be kept at least 8′ above the sidewalk and 13’6″ above the street. Dead trees and shrubs must be removed.

To find out if you have a city tree in your yard, go to auroragov.org/trees, and you will be on the city Forestry page. Click on “Tree Maps”. Enter your address and click on “Zoom to.” Pink dots are city owned and maintained trees. The Tree FAQs page on the Forestry page will answer most of your questions. You may prune limbs less than 4” in diameter; however, if more attention or even removal is needed, contact the Forestry Department at
(303) 739-7177. If you pay to have work done on any of your trees, whether city owned or privately owned, you are required to use an arborist licensed through the City of Aurora. They have a list on the website.

Contractor signs may only be displayed in yards while the work is currently being done.

All structures and accessory structures must be maintained in a state of good repair, weather tight and painted.

All fences must be maintained in good structural condition including pickets, rails and posts. A fence permit is not required for new or replacement fences; however, installation of a new or existing fence must adhere to city standards (contact Access Aurora to be connected to the correct office for these regulations). Call 811 to locate buried gas/electric/phone/cable lines before digging.

Some type of landscape material must be installed and maintained to prevent erosion and conditions which may cause erosion. Barren soil, patches of dirt and weeds are not considered approved landscaping material.

Leaves and Grass in Storm Drains

Rake whatever lawn waste is on your property and sidewalk and dispose of it in the trash. Do not blow leaves and grass into the streets and gutters. This can cause clogged drains and flooding, as well as damaging the waterways.

Outdoor storage of items such as major appliances, indoor furniture, auto parts, tree limbs and debris, etc is not allowed in residential areas.

Don’t park too close to driveways (5 feet), fire hydrants (15 feet), crosswalks (20 feet), or stop signs and traffic signals (30 feet). Don’t leave your vehicle parked too long in one space on the street: 3 days if the vehicle does not work, 5 days if it is a motorhome or RV, or 7 days if it works properly. If it is time to move your vehicle, make sure you move it at least 100 feet.

No parking of vehicles (boats, campers, RV’s etc.) on landscape or lawn. New parking areas must be surfaced with asphalt, concrete, brick or stone pavers (gravel not permitted). All parking surfaces must be free of dirt, litter and weeds.

It is the responsibility of the occupants and/or owner to remove all animal droppings from their property on a daily basis. Animal excrement must be removed immediately from any public property. All dogs must be leashed.

Within 24 hours after a snowfall ends, snow must be removed from all city sidewalks adjacent to your property, including snow on sidewalks outside rear and side fences. The fine for single family homes is $25/day for the first two days, and then the city will charge the homeowner for a city contractor to remove the snow.

Trash service is required with a registered trash hauler. Trash must be in an approved, secure (from blowing out) trash container. Trash containers may be stored in rear or side yard only, not in the front or side yard adjacent to a public street and must be screened. Trash may NOT be placed in front of house prior to 5 pm on the day before pick-up and must be removed within 12 hours after pickup. Trash bags may not be set out until the day of trash pickup.

Any inoperative or abandoned auto, camper, trailer, or boat on the public street is prohibited, and should be reported to Access Aurora at (303) 739-7000.

Vehicles that appear inoperable, partially or totally dismantled or damaged to the extent that it would be unlawful to operate on public streets may not be stored outside on public or private property. It is unlawful to conduct auto repair outside on private property or public streets. All vehicles and trailers must be legally registered, display current license plates, and all tires must be inflated. (This includes vehicles parked in driveways or on the street.)

To ensure pedestrian and vehicular safety, no plants, fences, trees and/or other objects over 26″ high may be maintained in the visibility triangle measured from intersecting lines 30 feet each way along street gutter from the corner.

It is the responsibility of the occupant and/or owner of any property to cut and remove all weeds over 8″ in height. Weeds outside rear and side fences must also be removed.

(Richmond built homes and townhomes have their own covenants which are enforced by their individual property management companies, which are listed on the Links/Contacts page.)

No vehicle, boats, campers, trailers, etc. shall be stored or permitted to remain for more than five (5) continuous days on any lot, or on the street in front of any lot, except within enclosed garages or in completely secured from vision areas in the rear and/or side yard of the property.

Radio and TV aerials shall not exceed eight (8) feet higher than the ridge of any structure and shall be attached to said structure.

No structure of a temporary character, trailer, basement, tent, shack, garage, barn or other building shall be used on any site at any time as residence, either temporary or permanently.

No fence, wall hedge or shrub planting shall be placed or permitted to remain on any corner site except in conformity with the applicable resolutions, regulation, and restriction of the city and county board and agencies of the County of Arapahoe, State of Colorado, nor shall any tree be permitted to remain within such areas unless foliage line is maintained at sufficient height to prevent obstruction of sight lines.